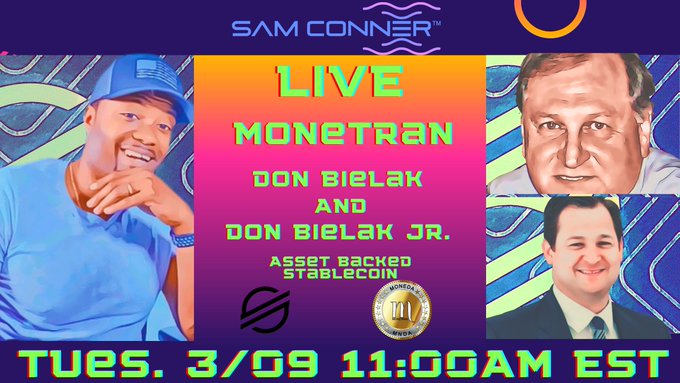 WILMINGTON, DE, USA, March 8, 2021 /EINPresswire.com/ — Don Bielak and Don Bielak, Jr. have been confirmed as guests for the Sam Conner podcast on Tuesday, March 9, at 11:00 a.m. Eastern. The podcast can be viewed on the internet by streaming live on Twitter @samconner.

The podcast is archived and can also be viewed on YouTube .

The Bielaks, Monetran CEO, Don Sr., and Monetran Chief Systems Engineer, Don Jr., will talk business with Conner, who is well known throughout the technology world for his podcasts, which generally revolve around dynamic companies which employ blockchain and cryptocurrency as part of their business models. Conner has an extensive Twitter presence with thousands of loyal followers and fans, as well as many more on Facebook and YouTube.

Monetran is a budding internet fintech company which management plans to develop into a universal payment provider. The company recently completed a sold-out quarter-million dollar SEC Regulation Crowdfunding offering. This came on the heels of Monetran’s launch of its minimal viable product, or MVP. The MVP enables customers to buy, redeem, hold, transfer, or pay with the company’s tokens, known as Monedas.

Monedas are stable tokens, which eliminates the volatility that most cryptocurrencies experience. They are backed 100% by interest bearing U.S. government securities, including Treasuries and municipal bonds. Also, they are designed to gradually increase in value, which makes them inflation resistant and enables them to serve as a true store of value.

The Monetran system is built on the Stellar blockchain. Stellar enables world-wide transactions which resolve in 3-5 seconds and cost a fraction of a cent each. This results in Monetran being able to make fast, inexpensive domestic and cross-border payments on a global scale.

Conner, who is an expert on Stellar and its distributed ledger technology, reflected on the organization’s mission. “Stellar is paving the way in providing innovative vehicles for financial instruments, leading the way in digitizing securities, stablecoins and CBDCs,” he said, adding, “I’m excited to learn more, and share with the broader community, what Monetran has been developing”

The management of Monetran has set its sights on the U.S to Mexico and Latin America remittance markets. Once fully operational, the company intends to compete in those markets, which account for $50 billion in transactions on an annual basis.

Monetran maintains a website from which tokens can be purchased and/or redeemed at www.monetran.com